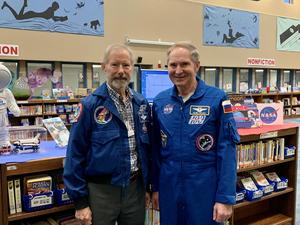 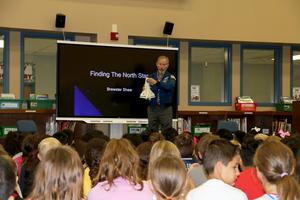 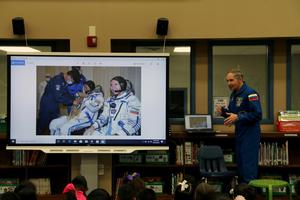 Students at Smith Elementary welcomed two special guests who shared their out-of-this-world experiences.
Astronaut Brewster Shaw and Cosmonaut Valeri Tokarev stopped by and visited with students sharing about their time spent in space. The guests are Association of Space Explorers (ASE) members who are attending this week's XXXII Planetary Congress happening in Houston. Part of the Congress includes a Community Day to educate the public and to inspire future explorers, scientists, engineers, and civic leaders.
Shaw and Tokarev shared their knowledge, experiences, and passion for space exploration with students through discussions about what it's like in space, what they see when they are in space, and how they knew they wanted to be an astronaut and cosmonaut. They brought in a model space shuttle and talked with students about the components and how that craft is their home. Additionally, they shared videos and photos that showed students their story about their time as an astronaut.
Shaw is a veteran of three Shuttle missions and was the pilot of the Columbia Space Shuttle in 1983, the Commander of Atlantis in 1985, and the Commander of Columbia in 1989.
Tokarev is a Russian Air Force Colonel and test Cosmonaut. He has traveled to space twice and has performed two spacewalks before retiring in 2008.
Print