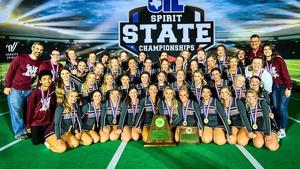 Congratulations to the Magnolia High School cheer team as they earned the State Title in the UIL Spirit State Championship. The team competed against 68 schools, taking first place in the 5A D1 category. The Bulldogs also took home the State Title with the highest score in the band dance.
Coach Courtney RIddell shared, “Despite the adversity we faced at the beginning of the season, these girls really bought in and fought hard to climb their way to the top. They wanted to prove to themselves and to our community that they had what it took to be the best, and I am the utmost proud of them. The bond that has been created is unbreakable and we are extremely excited for what the future holds for our program. Our motto this season was ‘When sisters stand shoulder to shoulder, who stands a chance against us?’. Go Dogs!”
During the final round of the competition, the team competed in all three categories in one routine. In the past, Magnolia has placed fifth in 2016, 11th in 2017, eighth in 2018, seventh in 2019, and this year first place.
The UIL Spirit State Championship was introduced five years ago to showcase the traditional game day role of a high school cheerleader. The competition consists of three categories: band dance, crowd leading, and fight song. The teams compete in a preliminary round where each category is performed separately. From those preliminary scores, only the top 20 teams from each division (1A-6A) are selected to move on to the final round, the State Championship.
Print