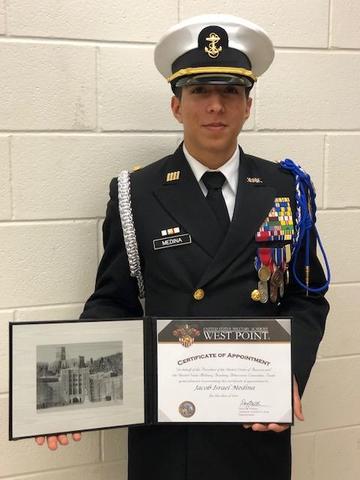 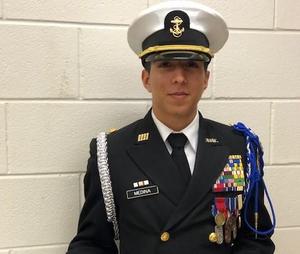 Magnolia High School senior Jacob Medina is now among the select few in our area to receive an appointment to the United States Military Academy to enter West Point with the class of 2024.
Jacob is currently the Battalion Adjutant and the Cadet Commander in the district NJROTC program. He has served as the Captain for the Varsity Color Guard, the CyberPatriot and the SeaPerch. He received the National Society of Sons of the American Revolution ROTC Medal; the most community service for the Raider Male Varsity State Championship; two Congressional Commendations from U.S. Representative Kevin Brady; and the American Legion Commendation.
Jacob is a National Hispanic Merit Scholar, AP Scholar and received the National Army ROTC Scholarship. His family has a very long military background as his father is a Marine and all of his aunts and uncles have served in either the Marine Corps or the United States Navy, several of whom graduated from the United States Naval Academy.
“I joined the NJROTC my freshman year and have a strong track record with giving back to my community. I have strived to get as much leadership experience as possible while taking Advanced Placement and IB courses in order to prepare for a future in a Military Academy and as an Officer in the United States Armed Forces. Being an officer has been my goal since middle school and I owe an exceptionally large debt of gratitude to the Magnolia NJROTC program,” shared Jacob Medina.
In 2018, Jacob was a member of the Superintendent Leadership Program and was involved in the inaugural Magnolia ISD Serves project. He has been active in volunteering for Hurricane Harvey, the Houston Food Bank, Iron Man, Houston Marathon, and Veterans and Memorial Day celebrations.
Jacob was accepted to Norwich University, the Virginia Military Institute, the Military College of South Carolina (The Citadel) and Texas A&M. He is excited to be part of more than 200 years of American and military history at West Point and be part of their time honored traditions.
Print