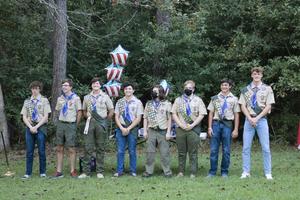 Congratulations to all of these students on earning this honorable achievement
On Saturday, August 14, 2021, 85 friends, relatives, and Troop 623 members gathered outdoors in Magnolia to formal convey, and then celebrate the achievement by eight Troop 623 Scouts of the highest Boy Scout rank of Eagle.

Although well short of what is believed to be the largest single such Court of Honor (in Utah in 2010 with 260 then new Eagles**), conferring more than one Eagle at a time is unusual, and a single ceremony for eight Eagles at once is unprecedented for Troop 623 and likely for most other BSA troops around the world. This approach for Troop 623 was chiefly related to the restrictions on face-to-face, indoor gatherings that COVID-19 has been causing for the last year-plus.

Since 2014, Troop 623, which is sponsored by the Wildwood United Methodist Church in Magnolia, has had 29 Scouts attain the rank of Eagle, consistent with the troop's mission statement: "To train up Men of Character through service projects in the community and camping throughout the year.“

Thanks to Kelly Beuerhausen for the photos.