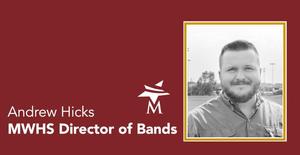 We are excited to announce Andrew Hicks as the new Director of Bands for Magnolia West High School
Magnolia, TX (May 9, 20220) -

Magnolia ISD has named Andrew Hicks the Director of Bands for Magnolia West High School. Hicks has been the Director of Bands for Burnet CISD for the past two years and was the Associate Band Director at Willis High School for seven years. Before teaching in Texas, Mr. Hicks taught in the Lawrence Central cluster in Indianapolis, and before that, he served as a Marine Musician and Trumpeter in the United States Marine Corps.


At Burnet CISD, he oversaw the instrumental music program for grades 6 through 12 and led a staff of five at the high school and middle school campuses. Hicks has been instrumental in leading bands to UIL Concert and Sightreading Superior Ratings consistently for the past seven years. His experience with marching bands can be seen in numerous awards, including UIL Area Champions for 4A and 5A in 2020 and 2019, and the UIL State Marching Championships Bronze Medal in 2020.


“I am incredibly honored and excited to step in and lead the amazing students at Magnolia West High School as the new Director of Bands. This is a great community filled with supportive parents and is led by an incredible administrative team. I believe that we will work diligently as a community of students, directors, administrators, and parents to take the Magnolia West band program to the next level of growth and success!"  stated Hicks.


He holds a Bachelor of Science in Music Education degree from Ball State University and was a Marine Corps Honor Graduate of the Armed Forces School of Music in Norfolk, VA in 2006. Mr. Hicks is happily married to his wife, Emily Hicks, and is the proud soon-to-be father of their first son, William.