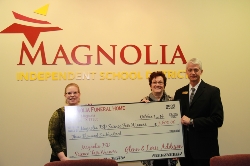 Elementary through sixth grade have a science fair at each of their campuses at different times during the school year. The high school students will compete in the District Science Fair on January 9, 2015. This year’s winners will be announced at the May 2015 School Board Meeting.

Director of Science Laurel Frank stated, “Being recognized as Science Fair Best of Show is very rewarding to our students. They spend a considerable amount of time creating and working on their projects. The donation from the Addison family is very generous and allows us to keep the importance of science top of mind.”

Each year the District sends numerous place award winners and special award winners to the Houston competition. In 2013-2014, 3 students went to compete at the state level. The Addison’s donation last year funded 22 Magnolia ISD students with a Nook or iPad.
Print