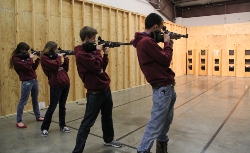 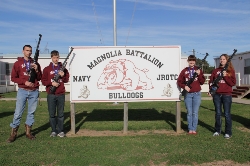 Last Saturday, students from the Magnolia ISD Naval Junior ROTC traveled to Joshua, Texas to compete in the Area 10 Texas State Air Rifle Tournament. The team competed in the last relay of the day giving them an advantage—they knew what score they needed to win the state title qualifying them for the Navy Nationals.
“Our rival that had been ranked #1 posted a score beyond anything we had ever posted so we knew it would be an uphill fight,” stated Chief Cranford. “When all was said and done, we shot our best score ever and managed to tie the leading score.”

Each team has four members so when Magnolia saw there was at tie with 2,029 points, they could not believe it. Air rifle ties are broken by the number of X's. A shot can score a 10 but not be exactly in the center of the target. A team receives a 10X by hitting the direct center of the target. The Magnolia team won by three X’s breaking the tie and was crowned the state champion.

“We are proud of our students. Going into this competition we were ranked #2 and the hard work and discipline paid off!” said Commander Bedell.

The students shoot from 10 meters without a scope magnifying the target. The precision and accuracy comes from many hours of practice. Chief Cranford, the coach of the team, has spent many hours working with the students perfecting their game resulting in this win. He has put Magnolia on the map with a top shooting Navy JROTC unit.

Last year the group won in all service championships the State Governors Cup. The Area 10 state win this year qualifies the team for the Navy Nationals which is a first in the district’s history.

This event is a team sport but there were also individual awards. Alyssa Grimes and Cody Hanes were also recognized as the number one and two shooters in Texas. Team B (Nicholas Dalton, Wesley Wild, John Barthen, and David Johnson) had a strong showing finishing in 8th place.

To qualify for the state tournament, the district team had to be ranked in the top 10 of 63 Navy schools in Texas. This is the first time Magnolia Navy JROTC will compete in a National Competition. Team A will travel to Anniston, Alabama in February to the All Navy Championships. The A team is Cody Hanes (captain), Alyssa Grimes, Jordan Goff, and Hunter Brooke.
Print