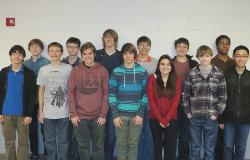 Magnolia, Texas (January 7, 2015) – The Magnolia High School (MHS) UIL Computer Science team has been busy competing in meets since early October in preparation for the UIL competitions that begin this month. This is only the second year MHS has had a computer science team and the group has already been to six meets with the advanced team placing in the top 10 at four of the six meets and the novice team placing in the top 5 at four of the six meets. The team also has had an advanced student and a novice student place in the top 10 in the individual written competition.
The team competes in team programming and individual written at two different levels: advanced and novice. MHS normally takes about six teams to each competition. The six meets this year were all hosted by 6A high schools: CyWoods, Tompkins, Katy Taylor, Fort Bend Clements, Dulles and Seven Lakes. The MHS advanced students are only in their second year of computer science competing against students who could possibly be in their fourth year. What an outstanding job these students have done.

The novice competitors placing at meets this year consist of Gabe Farough, Ben Johnson, Jacob Sass, Ryan Alford, Alex Renourard, Colin Knox, Jay Martin and Hardy Gatlin. The advanced competitors placing at meets this year include Sunny Tran, Johnathan Herrera, and Trent Harris. These students spend many hours before school, in class and after school preparing for competitions. Of course, this means there must be a dedicated coach behind the scene, Mr. Joel Mellen. Mr. Mellen has 15 years teaching experience in the computer science field and MHS is proud of what he has accomplished in the two years he has been part of the team at MHS. It will be exciting to see what these competitors are able to achieve at the district UIL meet later this year. It is anticipated for this year to be an opportunity for these students to advance to the state level.

All UIL academic competitions begin in January and MHS will have students competing in several practice meets all in preparation for the UIL district meet held in early April. Last year, the computer science novice team took 3rd place at the district meet and Sunny Tran took 3rd place individual and went on to compete at the region meet. This was an outstanding performance by first year students, of who all were freshmen.

The Computer Science competitors have definitely started off the academic competitions in the right direction. There are 14 other academic areas of competition and there is a dedicated coach behind each and every event. All students have been working with their coaches since early October in preparation for this year’s competitions. It will be exciting to watch the MHS UIL Academic team as they compete this year and to see what the students can achieve.
Print