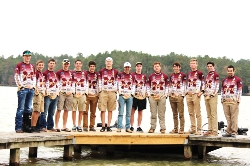 Magnolia, Texas (January 22, 2015) – Something “fishy” is going on in the halls of Magnolia West High School and if the founding members of the first Magnolia West Angler Club fishing team (MWAC), have their way, they will be winning a state fishing tournament by the end of their first season.
West freshman, Cameron Carter and sophomore, Logan Thumann found inspiration to create a high school fishing team after what they deem a divine meeting with David Cosner, a member of the Texas Bass Cats Fishing Team. Carter explains, “Our family thought we were just buying a boat from him but apparently God put him in our path for a bigger reason.” The young men shared David’s lifelong love of the sport of Texas lake bass fishing and that, along with David’s experience in team fishing, helped the team get its start. “He has really stepped up to mentor us as we’ve put this team together”, says Carter. “He is inspiring to us and we want to push harder to make this happen”, adds Thumann.

It didn’t take long for the word to spread among the fishing friends and after Facebook posts of their winning catches in local and regional tournaments, their friends soon got hooked on the idea too. “These kids have been fishing together for years growing up around the Magnolia area. While other kids were playing video games on Saturdays and after school, these kids were hitting the local lakes and streams trying to catch the big one”, one mom added. “They are just now taking it to a competitive level by forming this team.”

School fishing teams are not as uncommon as you might think; many high schools and universities have bass fishing teams. Mark Gintert, the National Youth Program’s Coordinator for The Bass Federation is quoted as saying, “Fishing is the fastest growing high school sport in the country today.”

Kirk Clugston, a math teacher at Magnolia West, has taken on the role of school sponsor for MWAC and will be accompanying them to tournaments. The team has also secured many commercial sponsors including Academy Sports + Outdoors, Berkley, and Spring Carpets. In addition, a local fishing rod maker, Kistler Custom Fishing Rod Corporation, is sponsoring the team president, Cameron Carter. Kris Oberly and Robin Carter are delighted to serve as the team’s parent coordinators.

The team currently consists of eighteen members. “We have many goals for the Magnolia West Angler Club,” says Cameron Faulkner, the team’s historian. Each member is encouraged to be certified in Angler Education, mentor other fishermen, and participate in organizing a local charity fishing tournament. Many organizations will help facilitate this charity tournament including the team mentors from members of Texas Parks and Wildlife, the Texas State Bass Fishing Team and the Texas A&M Bass Fishing Team. Zach Knowles says, “We are really hoping for any support we can get from the amateur & professional fishing community.”

Zach Knowles, club reporter added, “I’m really looking forward to fishing with my friends this season. Having our parents in the stands watching us play basketball is great but having my dad as captain in the boat with me each tournament will be an awesome competitive experience. I can’t wait for our team to take some wins at our tournaments.”

Bryce May, the team’s treasurer, brings many years of experience from his participation with the Magnolia 4H Sport Fishing Project.

The next two tournaments are scheduled for January 17th at Sam Rayburn and the team’s first Fisher of Men Tournament on January 31st. The club’s mission statement, as it appears on their jerseys, quotes Matthew 4:19 that says this team will be fishers of men. The team looks forward to participating in the state tournament on Lake LBJ, March 20 through 21st, 2015.

A huge thank you goes out to all the sponsors and supporters of the MWAC for the 2014-2015 season. Anyone interested in joining sponsorship can contact Robin Carter at 832-276-8962.
Print