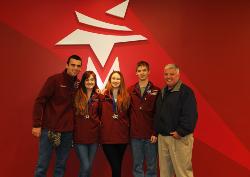 Magnolia High School junior Alyssa Grimes recently competed with her air rifle teammates in the Navy JROTC National Air Rifle Championships in Anniston, Alabama. The air rifle team from the Magnolia JROTC qualified to go to the national competition by winning the state meet earlier in the year, in which Alyssa won the individual competition as well. This year she accomplished what all high school age shooters aspire to, the Junior Distinguished Badge awarded by the Civilian Marksmanship Program (CMP).
Alyssa has been a top contender in the national sport air rifle scene since she was a freshman and has represented Magnolia in the Navy nationals and Junior Olympics nationals the past three years. Most distinguished shooters receive the Junior Distinguished Badge in their senior year. Alyssa did it in her junior year thus exemplifying her exceptional talent and hard work to consistently compete at the highest level.

The Junior Distinguished Badge is awarded to school-age junior three-position air rifle shooters who distinguish themselves by attaining a series of high rankings in designated major junior air rifle championships. To receive the badge, junior shooters must earn 30 Excellence in Competition (EIC) points in designated competitions that are at least at the State level. At least 10 of the 30 points must be won in National Championship competition.

The CMP was created by President Theodore Roosevelt to promote shooting sports, safety, and govern military and civilian shooting competitions. Over the years the CMP championships have become the pinnacle of shooting sports and the Navy JROTC has partnered to establish air rifle shooting teams across the nation.

Thousands of cadets compete to qualify to attend the national competition. This was the first year in Magnolia’s history that the entire team won the honor to compete. The team finished 25th in the nation which was a great accomplishment, but the highlight of the competition was Alyssa received the coveted Junior Distinguished Badge. The Junior Distinguished Badge is a serialized gold-filled badge and is engraved with the name and serial number of each awarded.