School Board Honors March Students of the Month 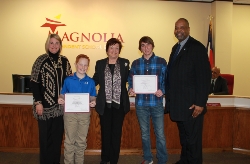 Carson Hart, a 5th grader at Ellisor Elementary, and Caleb Cherry, a senior at ALPHA Academy, were honored at the March Magnolia ISD School Board Meeting as the Students of the Month.
Carson Hart has attended Ellisor Elementary since kindergarten. He earns all A’s and his favorite subject is math. Outside of school, Carson plays shortstop for the baseball team The Drillers, and he enjoys hunting. He is a great shot at the range but when it comes to hunting from the stand, he gets a little nervous. Carson plans to play baseball and attend Texas A&M University. He recently attended an Aggie baseball game and was asked to throw the first pitch of the game. His dream is to be a professional baseball player possibly for the Angels; however, if Josh Hamilton, Albert Pujols, and Mike Trout are no longer part of the team Carson will consider playing for the Rangers. Carson is well liked by his peers and his teachers. He is willing to work hard for his grades and eager to gain new knowledge. Carson is a natural leader who others respectfully follow and he is “every teacher’s dream.”

ALPHA’s student of the month is senior Caleb Cherry. Caleb started at ALPHA this school year as a junior and is now only one credit away from completing all of his graduation requirements. Caleb made his way to ALPHA as a result of an opportunity he had to drive race cars. His family moved away from Magnolia and Caleb enrolled in a home school program to keep up with his academics.

It is difficult for a sixteen year old to balance the excitement and time commitment to a sport like racing and his academics. For Caleb, his academics fell by the wayside. Then his family moved to the Dallas area and racing cars was no longer an option. Caleb enrolled in public school and faced the reality of being more than a semester behind in school. Caleb spent last summer in Magnolia with close friends of his family. He knew about ALPHA from his time at Magnolia HS and from having cousins attend the school. Caleb’s decision to apply to ALPHA was one that had a trade off of personal sacrifice. He, along with his parents and the Perry family, agreed to allow Caleb to live here so that he could complete his high school education on time.

Caleb is the epitome of what defines an ALPHA student. Caleb’s teachers echo the same remarks that he is hard working, responsible, willing to assist other students in need, demonstrates initiative, has plans beyond his high school diploma. Caleb is focused on his future. He holds a special place in the hearts of his teachers because from day one at ALPHA, he has told them he plans to become a history teacher and would love to come back and work here in Magnolia ISD.
Print