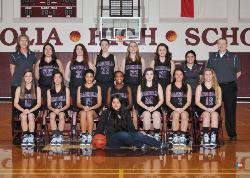 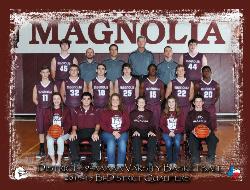 There has always been great pride in both the boys and girls basketball teams at Magnolia High School but this year the teams have even more to be proud of. This year both teams had the most District 19-5A Academic All-District players.
“As a coach it has been a blessing to have students in the program who are motivated in the classroom as much as on court. We consistently have young ladies who don’t believe in mediocrity and who have work ethics that will make them successful in all of their life endeavors,” states Head Girls Basketball Coach Erika Ritter.

When the coaches do not have to teach discipline and work ethic on the court, and the players are intrinsically motivated, the coaches are able to instruct at a higher level and focus more on the fundamentals.

Head Boys Basketball Coach Danny Randall states, “To have 10 Academic All-District players on our team is as big an accomplishment as being a playoff team. We stress the importance of their grades almost daily and take pride in their academic success.”

In the last 9 years the Lady Bulldog Basketball Program has averaged 11 players on the Academic All-District Team and has produced 24 Academic All-State Players. During this time the Lady Bulldogs have won 2 District Championships, 2 Bi-District Playoff Wins and have made the playoff in 5 of the last 7 years of playing at the 4-A Level. Their district record is 58-28. The team includes: Taylor Bearden, Brooke Kopecky, Bailey Smith, Kelly Sommers, Kayli Randle, Margaret Miesch, Hannah Coyle, Jasmine Mitchell, Victoria Stone, Nicole McNulty, Katie Dalton. Team managers are Charlie Sulak and Hilda Castro.

“As the principal of Magnolia High School, I am extremely proud! This is what we are about first!” stated Principal Jeff Springer.

With the success both on and off the court, the coaches truly believe it is because of the character and the commitment of the students in the program.

Student athletes qualify for Academic All-District by achieving a 90 Average or above for the fall semester. To earn Academic All-State, the player must be a senior on varsity who has a 92 average or above during her first seven semesters of high school.
Print