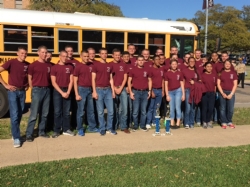 The Magnolia Navy JROTC Drill Team competed in the Area-10 Navy JROTC Texas State Championship Field Meet held at Texas A&M University on March 27 - 28. The team is composed of over 30 cadets, grades 9-12, from both Magnolia High School and Magnolia West High School. They all did a superb job and finished third overall. This was only the third time in the 14 year history of the Magnolia JROTC unit that they have qualified for state.
Drill is a year round endeavor with many cadets devoting additional practice time during their summer vacation. The drill team consists of several sub teams including: Armed Drill, Unarmed Drill, Color Guard, Physical Fitness, and Academic. The drill season started in earnest way back in August shortly after the school year began. With two to three intense practices a week the cadets must come together quickly in preparation for their first drill meet in late September at Kingwood High School where the team finished second. Over the course of this long season there are many drill meets but a team can only qualify for State at eight of those meets which are designated as “qualifiers.” In order to qualify a team must finish in the top two of all Navy units entered in the competition. In October the team traveled to their first qualifier in Corpus Christi to compete in the Sea Hornet Classic at Flour Bluff High School where they qualified for State by finishing second. The team was then treated to an overnight stay aboard the USS Lexington museum ship on Corpus Christi Bay. By the end of February, sixteen teams are left standing and they faced off at Texas A&M to determine the top two teams who will then advance to Navy Nationals in Pensacola, FL.

This year’s team is led by senior Cadet Commander Johnathan Smith who serves as the Battalion Commander and as the Armed Drill Team Commander. Under his leadership and commitment to excellence the battalion and drill team have flourished. After qualifying in October the team enjoyed success at “The President’s Own” drill meet hosted by George Bush High School, the “Five Star” meet at Dekaney High School and the “Tomball Classic” hosted by Tomball High School. All of these meets featured top level competition where Magnolia proved that they could compete with the best.

The two-day state competition kicked off with physical fitness which features sit ups, curl ups and a 1600-yard shuttle run. Magnolia’s physical fitness sub team has consistently performed well, but especially in the running and sit ups events. Sophomore Cadet Ines Cauquil finished second in the female sit up division by cranking out 295 sit ups in a row. All of Magnolia’s sub teams performed admirably at the state meet with the most laudable performances turned in by the entire team at Personnel Inspection and by the Armed Drill Team performing their armed exhibition routine. The first drill event, the personnel inspection involved all 33 cadets. The Battalion Commander (Cadet Smith) marched the entire team into the grading area and requested permission from the head judge to prepare for inspection. After he prepared the battalion for inspection all 5 judges descended upon the team and meticulously scrutinized the cadets for uniform preparation, bearing, poise and the ability to answer an array of questions under pressure.

The armed drill team featured each of the team members wielding a 10-pound rifle with impressive spins, precision marching and total focus demonstrated during their 7 minute exhibition routine. Their many hours of meticulous and exhausting practice resulted in a first place finish in the most coveted single competitive event of the whole meet, the Armed Exhibition event. The seniors who were an integral part of this landmark achievement included: Cadet Commander Johnathan Smith, Cadet Lieutenant Commander Mack Ferguson, Cadet Lieutenant Hunter Adams, Cadet Lieutenant James Kubena, and Cadet Master Chief Petty Officer Cameron Stokes. Although the drill team did not advance to the national meet, they achieved great success by finishing the season as one of the best Navy JROTC drill teams in Texas. HOO YAH Magnolia JROTC!
Print