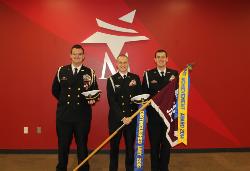 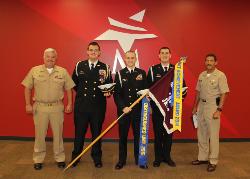 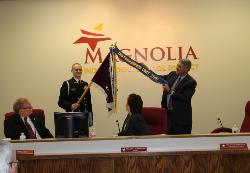 The Magnolia Navy JROTC Unit was awarded the Distinguished Unit Award for school year 2014-2015. The award recognizes the top performing schools in a given area and is awarded by the Commander, Naval Service Training Command. Magnolia Battalion is assigned to Area 10 which is headquartered in San Antonio and is responsible for the proper administration of the NJROTC program for 57 units in Texas.
The Area 10 Manager chooses up to 30 percent of his assigned schools/units based on sustained superior performance as displayed during the Annual Military Inspection, drill meets, field meets, air rifle meets, academic competitions, orienteering meets, community service, school service, college visits, military field trips and other unit participation and host events.

The cadet most responsible for this unit accolade was the Battalion Commander. The battalion was led by Cadet Commander Johnathan Smith. His leadership, teamwork, determination, steadfast work ethic, and total commitment to excellence was instrumental in the many successes that the battalion realized this school year. Following graduation Cadet Smith will attend Norwich University, a military school in Vermont, where his goal is to earn a commission in the U.S. Marine Corps. He will be succeeded as Battalion Commander by Cadet Alyssa Grimes whose dedication to duty and proven leadership skills will serve her well as she takes the helm for this coming school year.

The battalion will receive a certificate signed by Commander Naval Service Training Command, a “Distinguished Unit” flag streamer for the unit guidon and all cadets will receive a ribbon to be displayed proudly on their uniforms.
Print