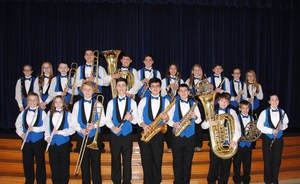 The last two weekends, members of the Bear Branch Junior High (BBJH) band participated in the audition process for the Texas Music Educators Association Region IX Junior High All-Region Bands and Orchestras. Close to 2,000 students from the North Houston area including Spring, Klein, Tomball, Conroe, Willis, Huntsville, and Montgomery were involved in the audition. Students began learning the audition material the first week of school and spent countless hours practicing.
In what has been one of the most successful years for the BBJH band, 11 students were awarded chairs in one of these elite ensembles. Four eighth graders earned chairs in both the prestigious All-Region Wind Ensemble and All-Region Symphony Orchestra. They not only achieved this distinction, but also finished at the top of their sections. Tuba player Barrett Eckhart and percussionist Tim Batchelor both placed first place overall on their instruments. Oboist McKenna Castleberry and clarinetist Jenna Stone both placed second in their sections. Earning chairs in the Symphonic Band and Philharmonic Orchestra are eighth graders Spencer Carey on trumpet, Isabel Bravenec on french horn, and Keyton Bush on trombone. Finally, earning chairs in the Concert Band are eighth graders Julia Alford on oboe, Drew Castleberry on clarinet, Anissa Bradely on trumpet, and Sam Blizzard on trombone. Honorable Mention students, missing by just a couple of chairs are Caylin Eaves and Taylor Thomas on flute, Meredith Ferguson and Devan Harris on clarinet, Hayden Mitchell on alto sax, Logan Farris on tenor sax, Chase Alford on french horn, Tyler Barnes on trombone, Cooper Waybright on tuba, and Jon-Avery Welch on percussion.

These outstanding musicians will now have the opportunity to rehearse and perform with their perspective ensembles. These groups rehearse only 10-12 hours before performing their concerts.

The All-Region Orchestras will present their concerts on Saturday, November 21, at Klein Forest High School, with the Philharmonic performing at 2:30 and the Symphony at 3:15. The All-Region Band concerts will be held Saturday, December 12, at The Woodlands College Park High School, starting with the Concert Band at 4:00. These concerts are free to the public.
Print