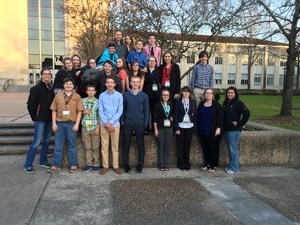 Magnolia, Texas (February 29, 2016) – Magnolia ISD students competed in the 57th Annual Regional Science Engineering Fair of Houston this past weekend. Students from 7th grade through 12th grade defended their original science research before a panel of engineers and scientists. Several Magnolia ISD students are advancing to the State Science Fair in San Antonio March 31- April 2, 2016.
The students who qualified for State are:
Students who also received notable awards at the regional fair are:
District administration would like to thank community leaders Mr. and Mrs. Glenn Addison for their continued support of Magnolia ISD’s science fair program. These students and their projects are another example of the District’s dedication to be the best district in the state of Texas.

Laurel Frank, director of science stated, “Magnolia ISD is proud of our students! The continued growth and success of our District science fair participation and winners shows the commitment of our students, parents, teachers, school administrators and the community. Thank you to our teachers for guiding our students and advancing them to State.”

The regional science fair participants will be recognized at the March 7 school board meeting.
Print