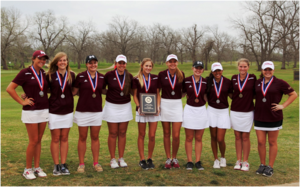 Magnolia, Texas (April 4, 2016) – Magnolia ISD Golf teams recently competed in the district golf tournament held on March 22-23 at the River Ridge Golf Club in Sealy, Texas. The difficultly of the course, and the wind gusts up to 30 mph both days created less than ideal playing conditions. Despite the challenges, the players had one thing in mind—to bring back banners! The teams have been focused all year starting with practice in August through the start of district competition, and they did not disappoint!
The Magnolia West Lady Mustangs fired a two day total of 735. Kassidy Chance led the ladies with a total of 165 strokes and 4th place individually. Yesenia Alexander, Maddie Brown, Norely Escalona, Katie Summerford and Isabella Smith put in strong performances. Their team score led to a second place district finish and a history making advancement to Regional competition.

Coach Ross says, “I am so proud of these golfers, they set a goal to hang a banner and to make school history, they accomplished that. Now they have made another one to get two days out of school for a trip to Austin!”

Jake Wade represented the Magnolia West Mustangs with a great performance finishing with a two day score of 157. He will also be advancing to regional competition as a Medalist.

The Magnolia Lady Bulldogs who were the defending district champs from 2015 went out strong to bring home the championship for a second year. Ava Schwienteck finished second overall with a total of 160 and Lucy Stinn was third overall with a total of 161. The rest of the team consisting of Regan Allen, Hannah Jones and Brenna Nelson put up season’s best performances to help seal the victory.

Coach Jackson states, “I’m extremely proud of this team. These ladies have worked hard on their games and have put in long hours to accomplish this goal. This is the first time in school history that the women’s golf team has won two consecutive District Championships. They have an opportunity to make it back to the State Championships. In 2009 the Lady Bulldogs finished 2nd in the State.”

It was a great tournament showing for the district. All of the golfers from both Magnolia and Magnolia West High have worked hard to elevate the district’s golf program to a very competitive level. Most of the players on both the men’s and women’s side play golf year round, and they have had many top finishes in the South Texas PGA, Houston Golf Association, Texas Junior Golf Tour and Beltway 8. The Houston area has some of the top players in the country in the high school ranks. The cooperation, respect and hard work between both coaches and teams helped Magnolia ISD shine in athletic competition and represent the best of both schools in District 19.