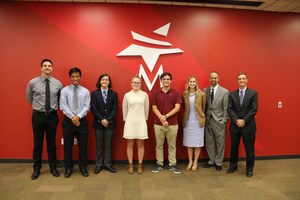 To be considered for a National Merit Scholarship award, semifinalists must fulfill several requirements to advance to the finalist level of the competition. The semifinalists and their high school must submit a detailed scholarship application which includes information about the student’s academic record, participation in school and community activities, demonstrated leadership abilities, employment as well as honors and awards received. A semifinalist also must have an outstanding academic record throughout high school, be endorsed and recommended by a high school official, write an essay and earn SAT scores that confirm the student’s earlier performance on the PSAT/NMSQT.

Jonathan Herrera from Magnolia High School was also named in this year’s National Hispanic Recognition Program. This program was initiated in 1983 to identity outstanding Hispanic/Latino high school students. Each year the program recognizes the students who scored in the top 3% of all Hispanic/Latino students who took the Preliminary SAT (PSAT).

Congratulations to all of these students!