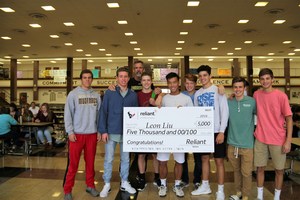 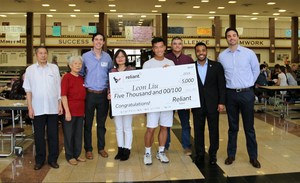 Magnolia, Texas (November 2, 2016) – Leon Liu, a senior at Magnolia West High School, was the recipient of a $5,000 scholarship from Reliant Energy’s Scholarship for Champions program. Reliant partners with the Houston Texans through the Powering Strong Minds and Bodies program to give college scholarships to exceptional students who excel both academically and athletically. The eight Houston-area scholarship recipients are selected based on excellence in academics, athletics, leadership, ethics and community involvement.
Leon has always had a rigorous schedule and consistently performed at a high level in his coursework. At the end of his junior year, he had taken all the advanced math and science course offered, scoring a perfect score on 8 of his 10 AP Exams. He is a 2017 National Merit Commended Scholar, a member of the National Honor Society, Academic Decathlon, UIL Mathematics and the Magnolia Rotary Job Shadow Program. He was also selected as a junior to be a part of the Magnolia ISD Student Leadership Program. Over the past two months, he assisted in planning and executing the campus Rock the Vote Campaign, educating others about the importance of voting.

Leon not only excels academically, but he is also a great athlete. He is a member of the Varsity Mustang Basketball and Varsity Mustang Tennis teams. As one of the tennis team captains this year, he led the fall team to the playoffs. Outside of school, he volunteers with the Little Hitters Tennis after school and summer programs.

Leon is dedicated and determined to be the best at everything he does. When he moved to Magnolia several years ago, he did not know English or anything about American sports. In effort to relate to his peers, he worked on his language barrier and learning athletic skills.

Magnolia West Basketball Coach Clifford said, “When I met Leon, he was not at all skilled with the ball and knew he would have to be cut after the tryout week. Leon proved me wrong. He gave his all in practice, and continued to practice until the lights were turned off in the gym. He was determined to be great- and so he was. This year, he will begin his fourth year on the team.”

Leon is considering several Ivy League schools including Princeton, MIT, Yale, Stanford, Rice, and has already been accepted to the University of Texas at Austin Honors Program to further his passion for mathematics.

Leon is always surrounded by friends who enjoy his sense of humor and kind soul. He would go above and beyond to help anyone, and his future career goals support his jovial spirit.
Print