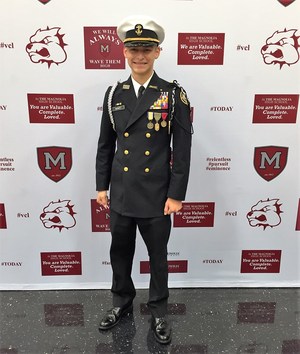 Magnolia, Texas (November 3, 2016) –Magnolia High School senior Laylon Mokry is now among the select few in our area to receive an appointment to the U.S. Naval Academy. Laylon received his nomination from the NJROTC program.
Laylon is the current Commanding Officer and Physical Training Commander of Magnolia High School's NJROTC; he received the Sons of the American Revolution Bronze ROTC Medal in 2016; a member of the National Honor Society; an officer in Mu Alpha Theta Math Honor Society; and a member of the Magnolia ISD Student Leadership Program. In 2016, Laylon was an Advanced Placement Scholar with Distinction and a National Hispanic Scholar.

"It is a real honor to represent my area of the country at the Academy. I am excited to continue to develop my leadership skills at such a prestigious school," said Laylon. "A special thank you to my family, my NJROTC unit and my teachers for their support. I will proudly serve my country.”

Laylon began the application process in January 2016. The application consists of standard college admissions test, nomination, medical examination, and a fitness assessment. In June 2016, he attended the U.S. Naval Academy Summer Seminar at the campus in Annapolis, Maryland.