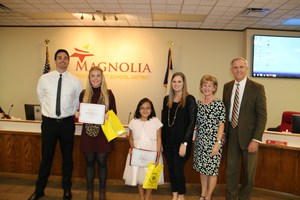 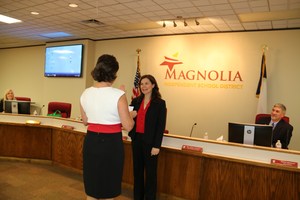 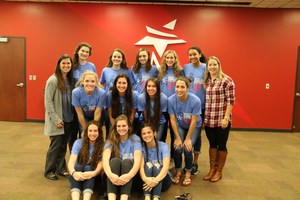 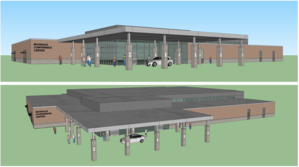 Magnolia, Texas (November 15, 2016) –Magnolia ISD Board of Trustees held their monthly board meeting on Monday, November 15. Several students and groups were recognized at the meeting.
The November Students of the Month are Magnolia West High School student Merritt Coleman and Smith Elementary student Lilia Monter.

Merritt is currently ranked as the Salutatorian of the Class of 2017. She is an active member at Magnolia West and is involved in Varsity Cross Country, Student Council, National Honor Society, DECA, Varsity Soccer, Basketball, and FFA. Her honors include lettering in both Cross Country and Soccer, while also receiving various awards such as Cross Country Newcomer of the Year, Soccer Mustang Spirit, Daughters of the American Revolution, Most Outstanding Student in AP Human Geography, and winning at last year’s District DECA Competition. Her leadership positions include being the Freshman Class Secretary, Senior Class Historian, Student Council Vice President (both junior and senior year) and DECA Vice President.

In addition to her heavy academic and extra-curricular loads, Merritt was also selected to serve as part of the Magnolia ISD Student Leadership Program and Magnolia West Stang Gang. Her outgoing school spirit has landed her as the Magnolia West pep-rally emcee and is one of the many reasons that the student body voted her to serve on our 2016 Homecoming Court.

Lilia Monter is an incredible young lady from Smith Elementary. Not only does she shine academically, she is in Tae Kwon Do as a green belt, she is in the Smith Bluebonnet book club and chess club.

She has a passion for reading and has determination in everything she does. Lilia should be a lawyer because she always defends what she believes in and she is against injustice, no matter what. Lilia wants to attend Harvard or Yale University. She wants to study medicine or become a lawyer.

Lilia’s mom thanked Principal Mrs. Roman for this honor and said, “You are giving her a small sample of how big she can become.”

When asked what Lilia wants people to know about her she said, “I want people to know that I’m a nine year old that might be able to change the world.” Coincidentally, when Mrs. Roman met with Lilia, she happened to be wearing a shirt that said, “This girl is going to change the world.” Lilia wants to inspire people, to teach them and to help them.

At Smith Elementary they focus on grit, determination and hard work. As you can see, Lilia represents that perfectly.

Community partner Davam Urgent Care honored both of the students of the month with a gift card for all of their hard work.

7th Annual Flags for Our Hero’s Campaign –Students, parents, staff and community members met on Saturday, November 5 at the Houston National Cemetery for the 7th Annual Flags for Our Hero’s. This year 90 participates placed approximately 7,000 flags, which is 1,000 more than last year. Next year’s event will take place on Saturday, November 4, 2017.

2016 Texas Department of Agriculture Certificate of Achievement recognized Magnolia ISD Child and Nutrition Department for participating in the 2016 Local Produce Challenge. Our food service department was recognized for using fresh local Texas produce in all of our cafeterias.

Coach Madison honored the Magnolia High School Varsity Bulldog Volleyball team for Area Champions and Regional Quarter-Finalists. All 12 girls on the team are Academic All District.

2015 Bond Update – The rendering of the District Conference Center was presented to the board. The project is in the construction design phase and is expected to go out for Competitive Sealed Proposal in February 2017.

Trustee Position #2 – The board appointed Sonja Ebel to fill the vacancy of Trustee Position 2 which was formally held by Deborah Rose Miller who resigned from the board in October. She worked for ExxonMobil for 17 years in human resources and graduated from the University of Minnesota. Sonja and her husband Steve have four children in the district.
Print