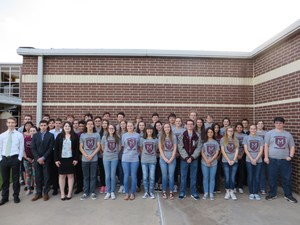 Magnolia, Texas (April 3, 2017) - The Magnolia High School UIL Academic Team won the District 20-5A Championship title on March 25 for the fourth year in a row! This is the seventh time in the last ten years that Magnolia High School has been the district champion. The school’s team had 77 competitors entered in the meet that competed in 21 academic events. The team came home with 49 students placing in scoring positions and 33 of these qualified to advance to the region meet. The total points earned by the high school was 570 points – incredible!
This could not be achieved without the hard work of the students who are dedicated to this program. This group of students is led by 14 academic coaches who have spent countless hours working with these student preparing to compete.
The coaching staff consists of veteran coaches: Susan Mathews – Accounting, Ashley Minter – Calculator Applications, Diane Murray – Computer Applications, Marcia Barren – Mathematics, Kimberly Bailey – Ready Writing, Kathy Celestine – Science, Anthony Lee – Social Studies; first year coaches: Charles Koonce – Computer Science, Katherine Magdaleno – Number Sense, Stephanie Woods – Spelling & Vocabulary; and first year teachers who also took on coaching UIL: Cassandra Cox – Current Issues & Events, Alec Brewster – Literary Criticism and Eric Schwerdtfeger – Speech & Debate.

We would like to recognize all of the students and their success at the meet. The students listed below all contributed to the school’s total 570 points. The region qualifiers will be representing Magnolia High School at the Region 3-5A Academic meet to be hosted at MHS on April 7 and 8. Congratulations to an awesome performance at the district meet and good luck at the region competition.
Print