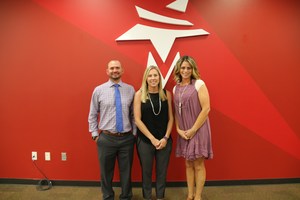 Derek Cain has been with the district for the past seven years. He has taught U.S. History at Magnolia High School and served as the boys’ basketball junior varsity coach and as the varsity assistant. Cain is a graduate of Texas State University and his first coaching job was at Lampasas High School as the boys’ basketball varsity assistant and junior varsity coach. Cain knew the path he wanted to pursue as his dad has been a basketball coach for over 30 years.

Ashley Farris has been the head volleyball coach at Willis High School for the past five years. Her accomplishments include 2016 Bi-District finalist, 2015 Regional Semi-Finalist which was the longest playoff run in the history of Willis Volleyball, and she was named the 2015-2016 Willis ISD Coach of the Year. Prior to Willis, she was the assistant volleyball and basketball coach for Marion ISD and the head volleyball coach for Texas Tigers Volleyball Club in Seguin. She is a graduate of the University of Texas at Arlington and holds the record for most digs in a single season (863) and career (1,921).

Emily Buckley’s volleyball career started in high school and continued collegiately as the outside hitter at Rick’s College. After college, she began coaching at her alma mater at Apple Valley High School in California. During her 6 seasons as the head volleyball coach, she led her team to district playoffs each year. When Emily moved to Magnolia, she continued to coach volleyball with the Renegades Volleyball Club for three seasons. She has been in education for 19 years, teaching high school chemistry, biology, and physical education. She has worked for Magnolia ISD for the past 4 years with three of those years at Magnolia Elementary and this past year teaching and coaching at Magnolia West High School.
Print