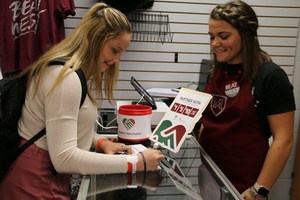 Magnolia, Texas (October 18, 2017) –Magnolia ISD and the Magnolia community are raising funds to support a small district in Orange, TX, Little Cypress-Mauriceville CISD (LCM), who was severely impacted by Hurricane Harvey. At the Magnolia West (5-0) vs. Magnolia High (4-1) halftime show on Friday, October 20, the district and the community will be honoring all of those who are helping to raise funds for LCM.
The Magnolia ISD Harvey Recovery Partnership kicked off in late September with all the campuses taking part in this campaign. The greater Magnolia community has also partnered with the district to support LCM extending the campaign through November.
The state of Texas has recognized our efforts. The Commissioner of Education Mike Morath shared a video message with the district thanking Magnolia for our support in helping others recover from Harvey. Governor Abbott highlighted Magnolia ISD in his weekly newsletter Rebuild Texas. The Magnolia community is making a difference!
Superintendent Dr. Todd Stephens stated, “As a district and community, we teach our students about service and pride ourselves on developing well-rounded civic-minded students. This is a great moment for us to model what we teach and believe. Our campuses have been selling t-shirts, donating proceeds from homecoming, teachers donating to earn a jeans pass, and the elementary schools along with their PTOs donating to support LCM. Everyone is involved.”
Magnolia ISD is donating all the ticket sales from the game, and local businesses including Chick-fil-A, HEB of Magnolia, Davam Urgent Care, Fit Kids America, Woodforest Bank of Magnolia, the Magnolia Education Foundation, Hometown Junction boutique, Magnolia Rotary Club, Glenn and Lorie Addison of Magnolia Funeral Home and Montgomery County Precinct 5 Constable David Hill have all contributed to support LCM’s recovery efforts.
Magnolia ISD adopted LCM to help the school district with the rebuilding process. Four out of six schools in LCM suffered major damage and most of the families and students in the area also lost everything. The students went back to school on Wednesday, September 20 and are attending half-day classes at either the North Orange Baptist Church or at the high school. The goal is to raise at least $50,000 so LCM administration can purchase items such as band instruments, athletic uniforms, and various equipment for the students.
Join Magnolia ISD and the greater community at the Magnolia Bowl Football game as the district supports Little Cypress-Mauriceville CISD rebuild after Harvey. Visit magnoliacares.org.
Print