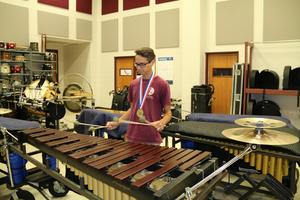 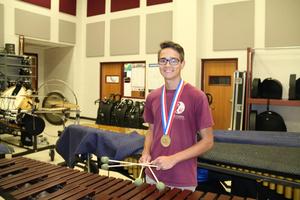 Of the approximately 100,000 students participating in the regional UIL music contests and the 25,000 musicians who performed at the state contest, only 2% of the solo performances earned this distinction for Outstanding Performer.

Outstanding performer winners are selected after the entire contest is completed. Judges review all the first division winners and then determine if a performance is worthy of this honor.

Band Director Bob Medina shared his excitement about this award, “As an artist, we are dedicated to the process of becoming a better artist. Jared is on the snare line but for his solo contest, he chose the marimba. The type of literature he learned and played is what professional musicians on tour are playing. He is an amazing student!”

Jared received a gold medal and official letter in late June of his selection for this award. “I was surprised to receive this honor as this was my goal but I wasn’t sure I had put enough work into it to reach this level. The solo I picked was very challenging and I thought I could have prepared a lot more,” stated Jared.

Jared, who comes from a family of talented musicians, plans on attending Lone Star College after graduation and then transferring to a top music school such as University of North Texas College of Music or Texas A&M Commerce.