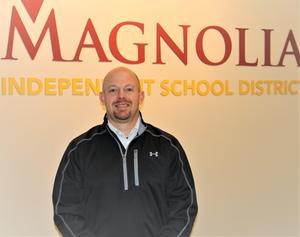 Magnolia, Texas (February 11,2019) – JD Berna has been named the new athletic director for Magnolia ISD. Berna has been the head coach at Magnolia West High School for the past three years and in 2017 was named District 20-5A Coach of the Year.

In his three years at West, he had a winning record of 25 - 9. In 2016, 2017, 2018 he brought the team to be Bi-district Finalists and in 2017 District Champions. His expertise in all areas of coaching and administration will help to further the foundation of the district’s athletic programs.
“I am honored to have this opportunity to continue to work towards being the best district in the state. I am excited about being able to work alongside the staff and the young men and women in the district to develop well rounded athletes and athletic programs,” stated Coach Berna.
Berna graduated from Tarleton State University in 1999 and began his student teaching at Stephenville High School under then Head Coach Art Briles. He began his coaching career at Linden-Kildare High School moving with his head coach to East Bernard and Springtown High Schools.

In 2003 he accepted the position of Strength and Conditioning Coordinator for Head Coach Art Briles at the University of Houston. During his tenure at the university, Coach Berna was responsible for both the men and women sports programs, working with many All American athletes.

In 2006, Coach Berna had the opportunity to return to the gridiron at a struggling Abilene Cooper High School becoming the assistant head football coach. He was in charge of coordinating the boys and girls junior high programs, coordinating special teams, implementing district wide conditioning and strength programs, as well as helping coordinate the offense. Their teams won back-to-back district championships in 2009 and 2010, and played in the third round playoffs their final three years at Abilene Cooper, setting many offensive school records.

In 2011, Coach Berna assumed the same duties in Temple, turning around a program that only had two winning seasons in 12 years. Coach Berna worked with the defense, and was instrumental in reviving the program, winning 44 games and winning three straight district championships the last three years, advancing to the State Finals in 2014 and the Region III Finals in 2015.
Coach Berna and his wife Vanessa have a daughter Tatum who will turn six this year. Vanessa is an elementary teacher at Nichols Sawmill and was named Magnolia ISD Elementary Teacher of the Year in 2018. She has also been recognized for her educational contributions in Abilene ISD and Temple ISD.
Print